Posted under Catering News ME, F&B.
by Dina Maaty |
As demand for local produce increases in the GCC, Crystal Chesters looks at the gaps in the farm to table supply chain and questions the sustainability of current agricultural methods.

Local is the buzzword this month as Dubai Food Festival celebrates the region’s diversity of homegrown concepts and local chefs. However, one aspect of local that comes up against significant challenges in the region, is produce.

Consumers and chefs want to source locally for a number of reasons including freshness, increased awareness of food-related health concerns and food security, and the desire to be more socially responsible and have better transparency around where food has come from. In addition, a growing number of farmers’ markets in the region are educating consumers on the variety of vegetables, fruit, herbs, oil, poultry and fish available locally.

According to the State of Environment Report published in 2015 by United Arab Emirates Ministry of Environment & Water, the number of farms in the UAE increased from 4,000 in 1971 to 35,704 in 2011, to cover an area of 105,257 hectares. However, in addition to the inherent regional challenges of extreme climatic conditions and water shortages impacting production, there are a number of barriers to procuring locally, such as inconsistent quality, poor hygiene, lack of suppliers, and pricing.

Even when it comes to understanding what local produce is there is confusion, with the term ‘local’ meaning something different from one individual to another. Andrew Matthews, head chef at Ultra Brasserie claims ‘local’ is food produced in the UAE, while Bernard Fantoli, corporate director of food and beverage at Time Hotels, which launched the UAE’s first urban rooftop garden in January to produce its own natural and fairly priced produce, follows the Slow Food principle – that local means produce and ingredients sourced within a 3,000-kilometre radius. 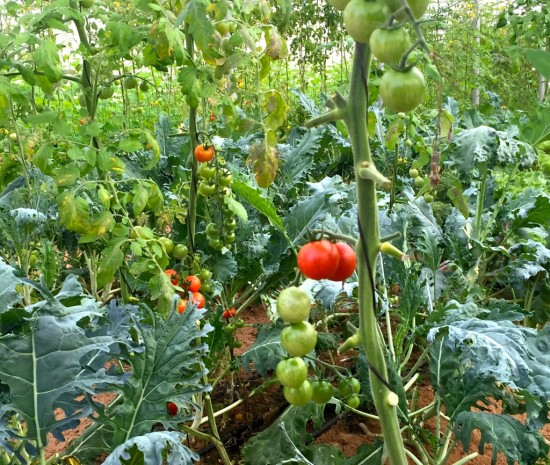 Another point of confusion is the difference between organic and local. Organic farms represent a tiny percentage of UAE farms, with around 39 in the country according to a 2014 report by Frost & Sullivan. However, this number is on the rise, having increased 1,698% since 2007 and set to reach US $1.5 billion by 2018 due to evolving consumer demand.  While organic produce can be procured from anywhere in the world, local is sourced within the region, however, many experts believe that consumer demand is usually for a combination of both.

“The only thing they have in common is that they are usually fresher. But local food that is grown in plain sand with chemicals and growth hormones isn’t healthy and is usually sprayed with chemical pesticides and herbicides.”

Fantoli agrees that consumers are looking for the combined benefits of local and organic. “People want to eat food grown locally and also food that has not been blasted with chemicals or extensively treated in order to preserve it during transportation.

“There is definitely some confusion between the two and we have an obligation in the food community to educate our guests and wider audience,” Fantoli comments.

And while farming locally is difficult, organic farming in the region presents even bigger challenges, as highlighted by Greenheart’s Kinane, who says it is more expensive and takes longer.

“Organic produce needs proper soil and seed management and is costly and labour-intensive. It also takes longer to grow and the fields require periods of rest.

“Pest and disease control should only involve natural remedies that don’t destroy the biodiversity of the farm, hence a certain amount of crops are lost in the process, which also contributes to higher prices.”

Keeping costs down for producers is paramount since there is still a reluctance among consumers and businesses to pay the premiums associated with organic, however, Jason Moore, co-founder of Local Food hopes that economies of scale will push down prices eventually.

“I think if consumers demand [organic] more, it will encourage more producers and suppliers to switch to organic, which will hopefully bring the price down,” he says.

Erkut Ozer, co-founder of Gulf Agri says that organic farming is becoming more mainstream as farmers look to the future and predict younger generations – who have grown up on organic – demanding more organic produce, and this in turn is likely to impact price, as it has in parts of Europe.

“We’re seeing a lot of farmers in the UK and Spain switching to organic; if everyone is going to want organic they need to catch up on this trend.

“We’re partners in an organic drinks company and we’re seeing purchasing prices of organic apples come down because of more variety of suppliers. Before you could get them just from Spain but now we’re seeing them from regions that traditionally were not organic.”

Sadek Al-Ramadan, CEO of Saudi Arabia’s Alyaseen Agri suggests that in terms of cost and implementation, clean agriculture, whereby farm chemicals are used but don’t leave residues on produce or on the environment, is a more suitable option for the region than organic farming.

“Organic production is developing locally as demand increases, however if we look to many countries in the world, we see that clean agriculture developed much faster than organic agriculture.

“Clean agriculture is easier to implement, achieves the health concerns, and doesn’t increase cost of production in a significant way,” he says.

Apart from price, another major barrier to more readily available local produce, is consistent supply. Currently, the most popular items for chefs to source locally are vegetables such as tomatoes, carrots, radishes and beetroot, however quality varies, and reliable suppliers are few and far between according to Matthews, who sources local produce during the cooler months but mainly relies on imports from Australia and Holland.

“I’m always quite skeptical when ordering locally and keep a close eye on the quality when receiving. It can be a hit and miss even during the cooler months. The UAE has a long way to go to be on the level of Holland and other high-quality producers of vegetables,” he says.

Sebastian Nohse, director of culinary at JW Marriott Marquis Dubai agrees that selecting the right partner is key. “We began a programme a few years ago to source certain items that are grown locally. There is actually a wide variety of local produce available but it’s important to select your partner carefully as quality can vary significantly,” he says.

Spencer Black, director of culinary at Vida Hotels & Resorts adds: “Finding the right suppliers who you can trust to deliver high quality produce and make sure transportation is done in the most hygienic way is the biggest challenge with sourcing locally.”

The same goes for fish and poultry sourcing, with hygiene and reliability some of the most common bugbears for chefs. Additionally, certain species have been over-fished and are now endangered, meaning that sourcing produce locally can actuacourtesy of Greenheart Organic Farms

“I get extremely frustrated with the local seafood trade,” says Matthews. “At the markets it can be quite an ugly scene seeing hamour, small sharks and other sea life.”

Meahwhile, hamour, which is now an endangered fish, was taken off of the menu at JW Marriott Marquis years ago, and replaced with similar alternatives, says Nohse.

Traceability is another common issue when it comes to meat and poultry, with some produce packaged as local, but actually coming from other parts of the world, according to general manager sales and marketing, Jeanette Alhaider of Al Radwah, which has been farming free-range, 100% naturally-fed, halal-slaughtered chickens in Dubai for more than 20 years.

“The problem in the UAE is that what is said to be local isn’t always local because you can import products and then repack them as local. It could come from China, Brazil, or from anywhere – I feel there’s not enough legislation about it,” she comments.

In order to ensure transparency, Al Rawdah offers facility tours, and claims that chefs can see the chickens as they hatch, watch them on the farm, and see them slaughtered before being delivered.

Nohse agrees that site visits are an important part of the procurement process. “You need to see what kind of condition the items are grown in or how they are slaughtered,” he says.

“For this reason we do around 20 site visits to vendors every year and do thorough audits of the physical facilities, the traceability of the raw product and the packaging and shipping.”

Farmers markets, such as those organised by Ripe and Baker & Spice also provide transparency, with consumers and chefs able to meet with producers and discuss their produce. Greenheart Organic Farms has a bespoke service for growing produce on demand to reduce waste, and discusses menus with chefs at the start of the season before reserving an area of the farm purely for that chef’s produce, ensuring an uninterrupted supply.

The company offers ‘just-in-time’ harvesting to eliminate storage costs, and cuts out third parties to save money. “Be it to individuals, hotels or restaurants, we cut out the middle man and this way we achieve fair prices and our end consumer is able to source the freshest best quality produce. We sell our entire crop directly to end consumers,” says Kinane.

That said, there are a number of third parties springing up to fill the gap between farmer and consumer as demand for local produce increases, says Moore of Local Food: “You have Kudra which helps market the hydroponic agriculture to retailers and consumers, and now my partners Alebdaa Alzahabi Investment are looking to fill that gap by linking the farmer to the consumer.”

Moore adds that Alebdaa Alzahabi Investment is also consulting with farmers on how to make their farms organic, while Slow Food supports farmers by educating them on how to farm more efficiently.

While local farming has come a long way, looking to the future there are some major concerns around continuing to use current methods. Experts advise that a reduction in water consumption is key to a more sustainable future.

David Currie, fish and agriculture consultant, Food & Agriculture Organisation of the United Nations comments: “Over-abstraction of ground water leading to lowering of water tables and salinisation has put many farms out of action. This trend needs to be reversed with environmentally sustainable solutions.

“New-generation greenhouses, like the one built by the United Nations Food and Agriculture Organisation in Al Dhaid that minimise water usage, and closed system aquaculture are two important technologies that could make a difference,” he says.

Alyaseen Agri’s Al-Ramadan adds that taxes on irrigation could come in to play to help conserve water, and that farmers will have to become more efficient.

And while Moore agrees that current methods are most definitely unsustainable, innovation in the UAE has never failed to surprise him.

“The current path we’re on is not sustainable with the growth of the population and water usage, but this country has been very innovative and I think we will collaborate and innovate and use education, technology and ethics to create a solution,” he concludes.

You have successfully subscribed!

Please login and you will add product to your wishlist